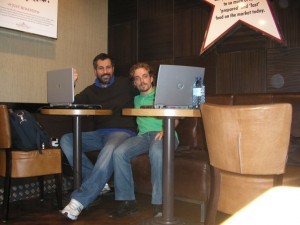 In August 2009, in London, my friend Jordi Noguera, now living and working in San Francisco, recommended me to open a blog for personal branding. He couldn’t know he was creating a monster. The day after (it was a Sunday), based on my background, I obsessively started writing financial news.

Some times later, I decided to come back to Rome but thinking: “Ok, but I’ll bring the game back with me“.

I have never stopped writing and, since then, FinSMEs has survived. And as I like to say, it is still in open beta.

Now, another year is over, and we are still here: 2012 has been a meaningful year of growth. With 3,684 new posts, it has (abundantly) doubled  the page views in comparison with 2011. It has been used by journalists, bloggers, entrepreneurs, investors, multinational providers of business intelligent information from across the world. Although numbers and metrics represent the essence of what we have been doing – and we cannot and don’t want to argue this – this growth  has been mainly made of quality people, from everywhere across the planet.

Given that, I want to say thanks to all of them, who have contributed via interviews, guest posts, and simple advices, to this growth.

Sure that for FinSMEs “The Best is Yet to Come“, I wish everyone a happy New Year.