Rewarder, a San Francisco, CA-based social marketplace that connects individuals seeking knowledge and expertise with real people who want to help in exchange for monetary rewards, has closed a $7m Series A funding.

The round was led by Granite Ventures and Radar Partners, with participation from angels such as Ron Conway, David Lee, and Kenny Lerer.

In conjunction with the funding, Chris Hollenbeck of Granite Ventures and Doug Mackenzie of Radar Partners will join investors Eric Hahn and Trevor Traina on the company’s board of directors.

Founded in 2012 by CEO Kendall Fargo and Graham Rasmussen, Rewarder has just launched after an initial phase of private beta testing, in which more than 100,000 users have joined the platform to post or win rewards. People can post Rewards for just about anything, including a customized workout plan or a travel itinerary, a rare collectible, long-lost friend, a missing pet, etc.
Currently, more than $10 million in collective rewards are available on Rewarder. 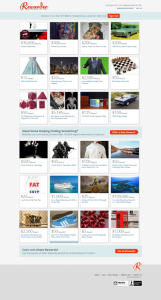